A dead coach is a useless coach

During our monthly consulting services meeting, an interesting conversation took place. The conversation revolved around how to show traditional organizations the benefits of going Agile.

Granted, everyone around the table was already sold to Agile so everybody was working toward the same objective. The question was how to bring traditional organizations to switch their ways of doing things in order to adopt a more Agile approach? The debate was “Should we use a big-bang approach where all the energy is put toward getting the organization to take a quantum leap?” or “Is it preferable to use small steps in an effort to bring the organization toward the desired state?”.

Some people around the table argued that to quickly gain acceptance and shock the system, it is better to take somewhat of an extreme position and avoid deviating from the goal and as such, implement the Agile practices without consideration to the context.

Others (including myself) believed that the hard position and extreme approach doesn’t help much. It typically polarizes positions and creates an environment where conflicts are frequent. Personally, I believe that small steps taken in the right direction are much better than attempting to quantum leap forward when it comes to large scale transitions.

As consultants we are called in to help organizations transition from a current state to a future and hopefully better future. We bring our expertise and our convictions to the table in the hopes that we can influence these organizations. What happens when the consultants’ perspective collides with the organizational culture, values, processes and people? Of course, it depends.

Needless to say implementing change is a difficult task and if it was easy, nobody would need help (i.e. consultants). But when consultants adopt the following approach:

What comes next is usually a dead coach…

Granted, the other extreme is no more useful when the organization thinks something like this:

What comes next is an organization that will be less (and less) adapted to its environment and a Darwinian (survival of the fittest) consequence will happen.

So what is the right thing to do?

If you are a consultant, it is always a difficult balance between sticking to your position and completely letting go. The answer obviously varies by organization but sticking to a hard position is rarely (i.e. never) a good approach to actually change an organization. 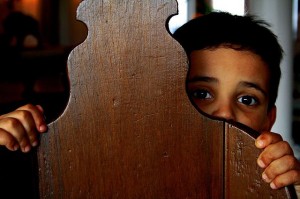 The soft-minded man always fears change. He feels security in the status quo, and he has an almost morbid fear of the new. For him, the greatest pain is the pain of a new idea. – Martin Luther King Jr.

Do you ever face resistance when attempting to implement a new idea or a new concept? I often notice interesting behaviors when helping teams and individuals transition to Agile. In fact, I notice strange reactions whenever there is a change management initiative underway.

In such circumstances, the first question that comes to mind is “Why is this individual afraid?“.

In my opinion, people are typically afraid for 2 reasons: they have had a bad experience in a similar situation in the past or they anticipate that the change will cause unwanted results. Either way, my approach is the same.

Being afraid is normal and is not limited to humans (for sake of this post, let’s limit ourselves to humans). As babies we learn through experience and the recommendations of our parents – the stronger the initial experience is, the longer it remains encrusted in our brain.

Let’s admit that many change initiatives have led to very negative impact for people. Remember enterprise re-engineering? What about outsourcing? Do you think people who lost their job as a result might be afraid of other organization-wide initiatives??

As change agents, it is our role to dig into the reasons behind the fears. I’m not talking about psychology, I’m simply talking about root cause analysis of the situation in an attempt to properly address the concerns. To do so, coaches must ask powerful questions and keep silence to make room for valuable information to be shared.

Once we understand the motivation or the source of the fears, we then need to be truthful and honestly tell if the situation will (or won’t) lead to the feared consequences. In the cases where it may actually lead to the expected consequences, we should engage the individuals into finding potential solutions or way to mitigate the unwanted conclusions.

Are we coaches or do we offer coaching?

As I was heading back home, I wondered – is coaching something we do or the way we are? So once I got home, I looked up the definition for both words (coach & coaching) and came across Visual Thesaurus (image below). 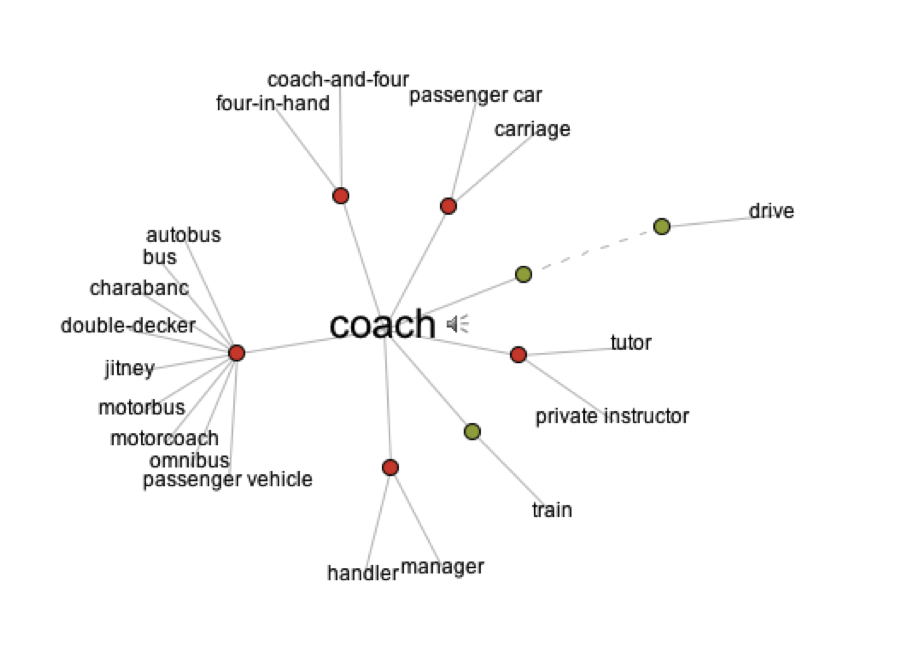 The reason I was wondering is that when I meet people who “do coaching”, they always say “I’m a coach”. I’m not actually disputing that they are (or aren’t) coaches, it’s just that I wonder if they have assimilated the coaching role so much as to BECOME coaches. Maybe it’s simply like someone who defines himself as being an accountant, an engineer or a clown when in reality it is because their day-job is accounting, engineering or clowning.

This leads me to wonder, if accountants stop doing accounting after 5 pm, does it mean coaches stop coaching after work hours? It seems to me, based on the many coaches I personally know that very few actually stop coaching – that’s almost a way of being – coaching the kids, sometime the spouse, some of the friends and so on.

Should we call ourselves coaches only when we are on duty or is there a better name to describe bipeds who provide coaching to people around them?

Personally, I have decided a while back that I do not define myself as a coach. Coaching is simply a tool for me – a very effective one, I would add – that I use to help people accomplish their objectives.