Agile teams – What people managers can learn from parents

Before I explain what people managers can learn from parents, I feel the need to defuse what some readers may have in mind. I am not suggesting that employees and team members are children or act like babies [although, sometimes … – sorry, I’m digressing].

The Art of Parenting

If you have children, you should quickly relate to the fact that nothing really prepares us to be good parents. Sure, while growing up we assimilate patterns, behaviours, and skills from our environment – including and often to a large extent from our own parents. At a later stage in our children-free life, some of our friends start to have kids and we observe them – sometimes with curiosity, sometimes out of sheer voyeurism, and sometimes with envy – and that’s when we contemplate the idea of having kids of our own.

Then, one day out of the blue, the kind doctor tells your spouse that she is pregnant – in our case with twins! But that’s an entirely different story 😉

Then comes the next stage of learning to become a parent, we spent countless hours on amazon.com previewing and ordering books, lot’s of books. Except for a few best sellers, the others titles vary based on our perceived areas of weakness and the bad pattern we noticed from our parents when they raised us.

And one day, a beautiful baby boy is born and/or a pretty baby girl – once again, in our case we got one of each.

Once the sleepless nights are over and the baby is capable of learning, parents slowly transfer increasingly complex tasks to their child: holding the milk-bottle, feeding themselves, walking without holding mommy’s hand, abandoning the diaper, selecting how much ketchup to put on their food, picking their own clothes, walking to school by themselves, deciding what time to go to bed, going to a movie without supervision, and so on up to the point when the child moves out of the house to start their own independent life.

What people managers can learn from parents

It is obvious that parenting is very different from managing people, no doubt about that. On the other hand, their are some similarities.

Nothing prepares people to become good managers. Sure, while growing up in our professional career we assimilate patterns, behaviours, and skills from our environment – including and often to a large extent from our own managers. Granted, some people had the opportunity to learn about management during their school years and that could be an added bonus.

As with parenting, once we decide to get into management we spend countless hours on amazon.com previewing and ordering books, lot’s of books. Except for a few best sellers, the others titles vary based on our perceived areas of weakness and the bad pattern we noticed from our previous managers.

How that applies to Agile teams

Agile management is somewhat similar to the art of parenting with the manager transferring to its team increasingly complex tasks and responsibilities. Helping the team self-organize doesn’t mean to abandon the team to itself without help or some supervision. Along the same lines as parenting, there comes a time when the manager must determine how much responsibility to transfer and what level of support to provide.

Similar to the role of the parent, the agile manager is there to support the team’s development and make it successful and autonomous until one day – maybe – the team is highly performing and can become independent.

The myths of self-organized teams

Many Agile practitioners will push forward the concept of self-organized teams as a first step towards an Agile transition. Unfortunately, self-organization is often mis-understood and many become frustrated with the concept. Below are myths taken from real life situations – including the inner workings of our organization.

Autonomy or self-organization is a strong contributing factor for motivation and motivated individuals lead to improved performance and better results. Attempting to implement self-organized teams without understanding the risks and the energy required isn’t a good idea.

I had the opportunity to facilitate a discussion table at the “Déjeuner-Causerie” in Montreal (last week) and in Quebec City (this week) where over 50 people gathered in each city to share their experience with Agile adoption.

Before I get into the main topic covered during the 3 hour breakfast, the participants shared with the group their topics of interest. Though the participants were at various stages of their Agile transformation and had different experiences with Agile, they shared common interests and as such asked interesting questions:

This post is a quick summary of the various conversations. Since most of these topics require further explanation, I will expand on some of them in upcoming posts (and conferences). For now, I wanted to share some of the discussions.

What is self-organization and what does it really mean?

Self-organization is one of the basic pillars of Scrum and is often misunderstood. People (and in particular managers) assume that letting a team self-organize is the equivalent of complete chaos. To avoid getting into such a situation, self-organization requires some constraints.

Self-organization is the process where a structure or pattern appears in a system without a central authority or external element imposing it through planning. This globally coherent pattern appears from the local interaction of the elements that make up the system, thus the organization is achieved in a way that is parallel (all the elements act at the same time) and distributed (no element is a coordinator). – Wikipedia

In his book, Jurgen Appelo wrote,

No self-organizing system exists without context. And the context constrains and directs the organization of the system. – Management 3.0: Leading Agile Developers, Developing Agile Leaders

As I already mentioned, Pyxis is an experimental laboratory and as such we have attempted to let people self-organize without (or with very minimal) constraints. In an upcoming post I can share some of the conclusions of that experiment but for the sake of this post, I’ll leave it as a “failed experiment”.

So back to constraints. In our context, the constraints are as follows: 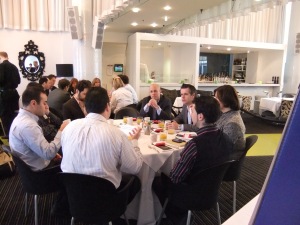 Yes, it can but it isn’t easy. Self-organized teams tend to go through various stages and success isn’t immediately achieved. Unless an organization is willing to invest into building a successful team, self-organization won’t really work.

How far can you push self-organization?

That’s really up to each organization. For instance, we have successfully pushed the concept as far as letting employees determine their own salary. Sounds crazy? Sure does, but that’s only because you haven’t factored in the organizational constraints.

You have probably imagined people getting together and giving each other huge raises. That’s what would happen if there were no organizational constraints. Once the constraints are well determined and understood, the team members can determine who deserves what as long as they fit within their team’s budget.

How do you get management on board?

That’s a difficult one to answer. The first question managers typically ask is “What will my job be?”. People managers are used to controlling what their team does, when they do it and even how they will be delivering the work. As Dan Pink mentioned:

That’s the reason why Agile managers need to alter their leadership style in order to success in an Agile context.

Can this work in any culture?

Probably not. Well, not without some organizational commitment. During last year’s Agile Conference, Michael K. Spayd explained that some cultures are more likely to adopt Agile than others. As such, true self-organization is more likely to succeed in a Collaboration culture or in a Cultivation culture. William E. Schneider’s book (The Reengineering Alternative: A Plan for Making Your Current Culture Work

) is very useful to help determine the 4 different types of cultures. Fortunately for us, Pyxis is a cultivation / collaboration culture.

How can people be motivated to work together?

Unfortunately, they can’t! Contrary to popular beliefs, people can’t be motivated – only they can motivate themselves.

To improve the team’s performance and the project’s results, we suggest that Agile project teams be staffed by asking people to volunteer for a project. Projects are typically staffed when project managers or people managers select the people who will take part of a specific project. Although that might seem like a good idea, it is much more powerful to seek volunteers. As one of the participant highlighted “I used to be bored to death in my normal job until one day, I asked (begged) to be part of a specific project. I’m so glad they granted my wish. I now work 55 hours a week! I am super motivated and nothing is going to make me want to leave that project”. Still think letting people select their project is a bad idea?

We are only starting with Agile, what do you recommend I read?

There are so many great books and blogs to help you get started with Agile. A while back, I published a getting started guide. I also read the following blogs:

I referred to the following books during my presentation

If you wish to be notified of upcoming events, send an email to metrempe@pyxis-tech.com.